Vuo attempts to do what other visual programming environments haven’t. It aims to be easier, free and open source, omni-platform, and faster, a tool for sketching new visual ideas using patching metaphors that isn’t held back by some of the restrictions that has tended to entail. To get there – and to fund what will eventually be an open source project across desktop and mobile – it currently uses a paid model, and is in active development. From the developers of Kineme, it builds on a lot of what VJs and live visual artists like about Quartz Composer, but attempts to go further.

Vuo is long overdue for comprehensive treatment here (we’d love to have contributors on that project, so let us know). But in the meantime, I like both the very beginner-level tutorial here on patching (17 minutes, but starting with the basics). And while the FAQ and “Why Vuo?” pieces linked below are important reads, perhaps the best comes from a developer’s opinion piece published in recent weeks.

I think this will sound familiar to some readers:

It may sound silly to some of you Quartz Composer ninjas, but the concept of an “Iterator” patch as a “for” loop took me forever to wrap my head around. As someone with a background in traditional programming there were a lot of idiosyncrasies in how data was handled in QC that were perhaps well-intentioned, but ultimately served to muddle the process.

Vuo is neat. I’ve found it to be intuitive to learn and it addresses a lot of the issues that I have with QC. It also takes a lot of inspiration in the strengths of Quartz Composer. One of my favorite features of Vuo is the push flow style of information. Vuo can use any number of independent triggers to make parts of your composition run. You can design your composition so that some parts run continuously, and others run only when needed. This opens up a lot of really cool possibilities that were either difficult or impossible to implement with QC, since in QC your composition is locked to the video framerate.

A Personal View on Vuo after Using Quartz Composer

Subscriptions, for now, begin at US$80/year; free versions are due next year.

If you’re using Vuo, or have specific questions, we’d love to hear from you. 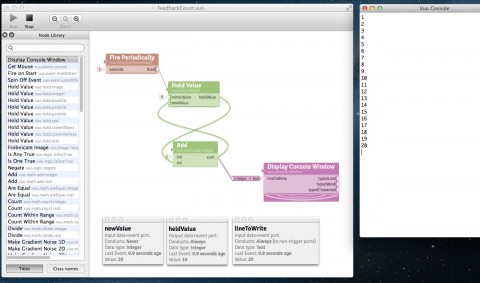 how-toiosSoftwareVJ
Looom for iOS makes animating like playing a musical instrument, now with major update
Software
mlre is an expanded version of the classic monome mlr, focused on performance
SoftwareVJ
Slimshader packs GPU shaders into your Eurorack for live visuals, thanks to RasPi
LinuxMacSoftwareWindows
Houdini 19.5 pours on visual features, from liquids to light to fire