Vuo in Beta: A New Hope for Visual Development? [Resources] 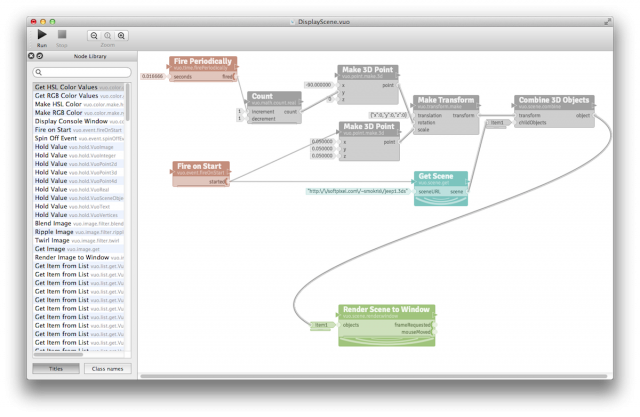 So, without a line of code, you want to make something new, visually. You’ve got Max, you’ve got Pd, you’ve got vvvv. But for quickly cooking up generative visuals, dynamic interaction, live animation, and more from a clean slate, the other option had been Apple’s Quartz Composer, a tool that has lost a lot of steam (and acquired quite a few bugs) lately.

Somehow, many people want some fresh blood on this scene. And that’s where Vuo comes in. From the creators of the Kineme plug-ins, it’s a chance to start anew.

We’ve been eyeing Vuo with interest for a while. The nodal environment promises faster creation and new magical visual powers, a chance to see a from-the-ground-up modern tool amidst a scene mostly dominated by architectures created years and years ago. It could be the visual programming option that feels most modern.

And now, Vuo has finally reached a proper beta. Early reactions are overwhelmingly positive – this is something people really do anticipate.

That’s doubly impressive partly because the Vuo beta doesn’t do a lot of things you’d expect. A big deal-killer for many: there’s no video in/out. No audio, no OSC, no Syphon, no math expressions. Did I mention no video?

These things are coming; you can check it out on the roadmap. But that has meant, in the meanwhile, what Vuo can do is already enough to whet some appetites – and early adopters are even pulling out their wallets to fund the effort. It’s something this community really hasn’t seen like this before.

Years in creation, the Vuo beta – available with a paid subscription – includes enough goodness that you can likely get some value right away. And, as covered today, there’s even Leap Motion integration for easy gestural input. The developers say Vuo means “flow” in Finnish. So, what will get into your flow:

Also, for developers, creating your own nodes is especially accessible. You write in C, as in other environments, but here with the ease of working with Qt and example projects. (It’s arguably easier, in other words, than making a Max or Pd external.)

Vuo compositions run natively on the processor. (Vuo’s developers here claim that “other multimedia environments” use “a virtual machine.” To be fair, vvvv, Max, and Pd also use native-executed code, even in the dataflow environment; I’m not sure what they’re talking about. But yes, this is an architecture that makes sense; that’s why the other dataflow tools do this this way.)

So, those are the technical features. But perhaps what’s more telling is the reaction from the visual community.

First, even with other tools, he wants something fast – which had been Quartz Composer (until Vuo):

For the past 5+ years, I’ve made my living mainly by making art, interaction design, installations, animations, real-time graphics, performances, custom tools and other various things using Quartz Composer. I use openFrameworks, Pure Data, Max, Processing and other tools also, but I will pretty much always choose to work in QC if it’s possible to create the project at hand using it. For me, it’s the environment where I work the fastest.

Even with all the current limitations, he’s happy to get to use Vuo as a comfortable, modern replacement. You can check out his own custom nodes (many of them already useful) on GitHub:
https://github.com/Mnstri/MnstriVuoExamples 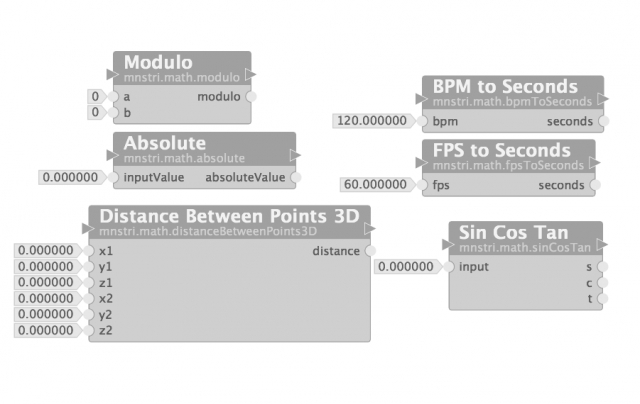 He is as kind to Vuo as he is unkind to Apple (even as he hopes for an update to Quartz Composer):

Sadly, QC is made by Apple and it has been quite obvious for a few years that Apple doesn’t really give a shit about the people working with Quartz Composer. It’s not aimed for the corporate executives creating their slideshows, funny posters and generic GarageBand songs on their MacBook Airs at the airport while waiting for their connecting flight.

I’m not certain that’s fair, personally. Part of what happened at Apple is simply that very bright, very creative people moved onto other challenges. (Unfortunately, two lead developers went on to found photo service Everpix, which has met an untimely end.)

But it is true that it may take a dedicated community focused on the needs of visualists to pull off the Next Big Thing. And that endeavor is very likely to require money and investment – not even the most hardened free software advocate would argue otherwise. What’s striking is the outpouring of support from the community, as well as the clever ways the developers continue to encourage that feedback loop, from t-shirts to referral programs to unique subscriber benefits.

Building on the reputation of Kineme and all it has done to aid artists’ work, the response is overwhelming.

Sample Tweet, sent in a Vuo update (by @danielmkarlsson): “Oh my glob! Under the Run tab is Show Events. I’m throwing kisses at the wind for you @vuoflow That is so smart!”

More on what Vuo can do, which will look very familiar to Quartz Composer users.

20 Seconds to a Synth: Zero-Input Sounds from Cheap PC Speakers