In the audiovisual field, it’s hard to top the virtuosic collaboration of Christopher Bauder and Robert Henke. Robert Henke, known to many as Monolake, has himself taken on lasers as visual instrument alongside his signature electronic sounds (controlled in Ableton Live, the software he co-founded). But pair him with long-time collaborator Christopher Bauder (of WHITEvoid), and you have an epic duo.

What’s striking about their work is the careful, meticulous construction of synesthesia. Each noise, each flash of light or movement is carefully choreographed so as if to seem fused. “Kinetic light show” is the term WHITEvoid uses for the result. It’s a combination of mechanical movements (in this case, orbs that can shift up and down in saves), lighting (here, lasers), and spatialized sound.

The approach goes back to ATOM, which set light-up balloons in a dance of sequenced rhythms, accompanied by Robert’s unmistakeable, minimal sounds. The effect is obsessive-compulsive, to be sure. Oddly, on some level, it’s not terribly showy – despite the grand scale. It’s about precision – a point hammered home in the Deep Web by the lone orb that frames the start and end of the performance.

And maybe that’s why I’ve found some people are split on their response to the Bauder/Henke work. There’s a decided avoidance of narrative. (raster-noton told me in a panel in June that their tendency toward abstraction stemmed perhaps from a rejection of propaganda in the DDR – but Robert and Christopher are from West Germany, not East.) That even disappointed some, in particular, because of the reference to the Deep Web – in this case, evidently more pun than political statement. This isn’t some data visualization of people using Tor or something like that; it’s a spatial poem in light and sound.

But give yourself over to being entranced by it, and it’s as though you’ve just stuck your head inside a modern digital Oskar Fischinger work. The physical presence of the orbs gives that sense of real immersion, of getting intimate with this otherworldly creature of color as it undulates above your head. Color palette, orb, and beam can interact as compositional elements with sound to form different spatial-sonic constellations, constructed into phrases and larger sections like a symphony.

In Berlin, there were two versions – a meditative, sparse installation rendition, and then a more extravagant live performance. Robert was also able to “jam” on the materials from Ableton Live – and following the ovation after the premiere, did just that as the audience departed, a gleeful smile on his face.

The technology is no small feat. That involved producing perfect sonic effect in the reflection-happy former power plant of Kraftwerk, and years of experience in tuning the high-speed motorized winch system (on Christopher’s side) and high-power lasers (on Robert’s). Software is custom-created in TouchDesigner, that ubiquitous choice of high-end AV work.

But even with all this technology, you aren’t given a sense that the instruments themselves are meant to dazzle: this isn’t about laser light or orbs, so much as it is about those producing an effect of pure abstraction. And the scale, too, almost seems necessary to contain the volume of the work rather than the other way round. I think it’s notable that Robert is equally effective as a performer working with just one laser.

It’s a celebration of discipline, not extravagance. But by being such, it’s also richly sensory – because you can let yourself get lost in hue and timbre.

And since I missed out on the Ballets Russes, I think I’m lucky to be alive for this artistic meeting. 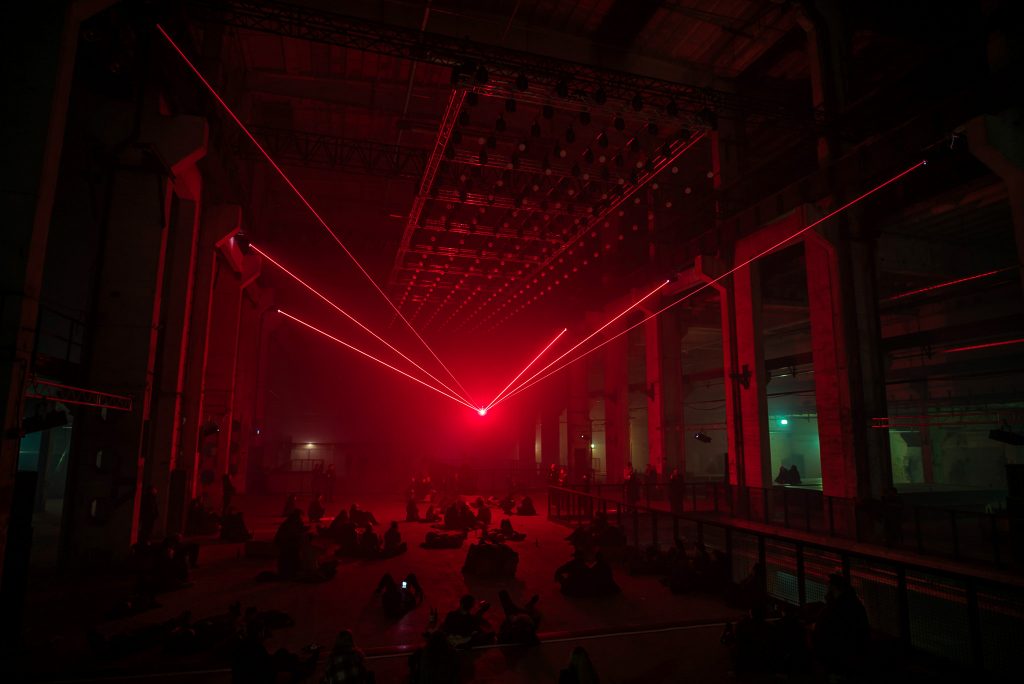 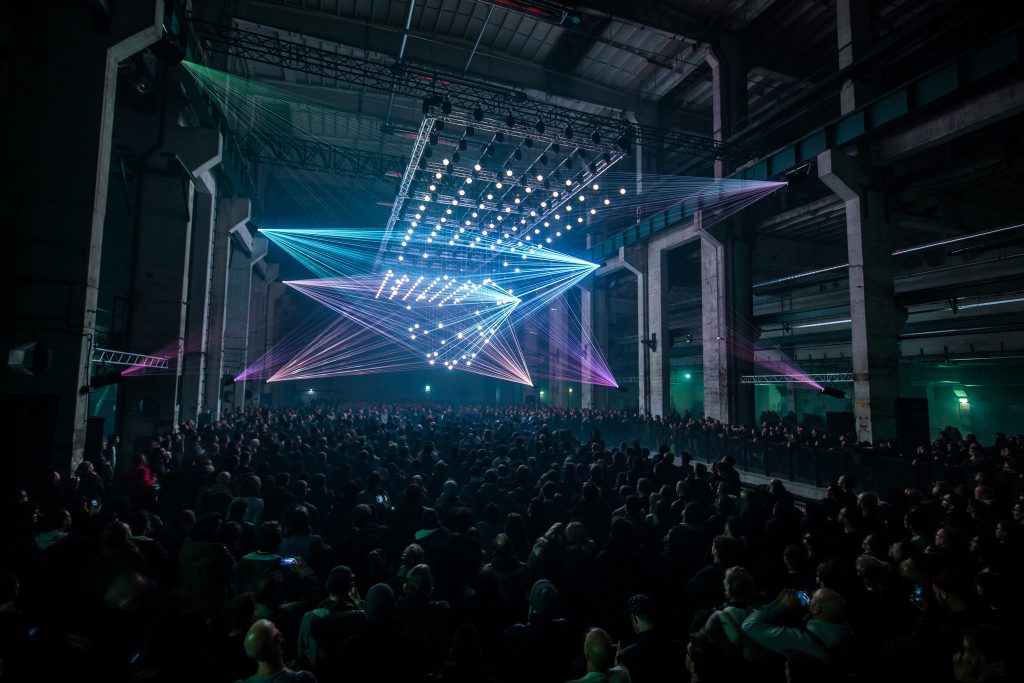 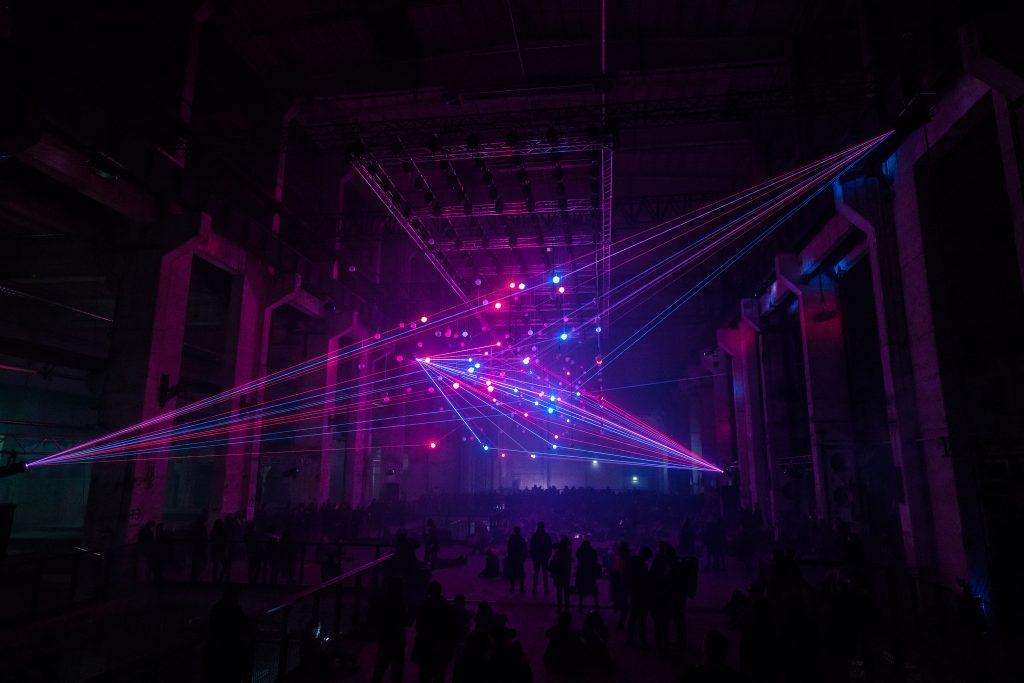 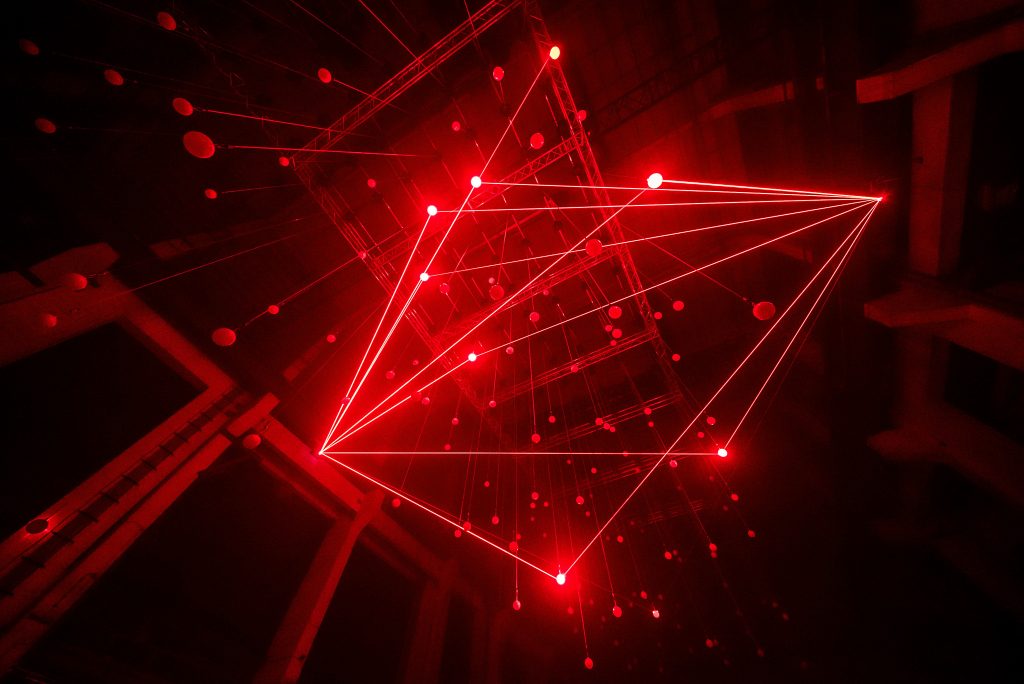 BY CHRISTOPHER BAUDER AND ROBERT HENKE

COMMISSIONED BY THE FESTIVAL OF LIGHTS LYON

Deep Web is a monumental immersive audiovisual installation and live performance created by light artist Christopher Bauder and composer and musician Robert Henke. Presented in enormous pitch dark indoor spaces, Deep Web plunges the audience into a ballet of iridescent kinetic light and surround sound. The work was presented as a preview at CTM 2016 Festival Berlin and will be followed by its original presentation at the Festival of Lights Lyon in December 2016.

The generative, luminous architectural structure weaves 175 motorized spheres and 12 high power laser systems into a 25 meter wide and 10 meter high super-structure, bringing to life a luminous analogy to the nodes and connections of digital networks. Moving up and down, and choreographed and synchronized to an original multi-channel musical score by Robert Henke, the spheres are illuminated by blasts of colourful laser beams resulting in three-dimensional sculptural light drawings and arrangements in cavernous darkness.

The installation brings together decades of separate research and experimentation by two artists with unique visions and passions for sound and light, and by innovative companies working in these fields. High-end laser system manufacturer LaserAnimation Sollinger provided the technical expertise and development for this very specific spatial laser setup. The high precision motor winch systems with real time feedback and the main control software are provided by Design Studio WHITEvoid in collaboration with Kinetic Lights. This novel combination of computer controlled kinetic elements and laser systems allows for setting animated end points to normally infinite laser beams. DEEP WEB uses light as a tangible material to construct threedimensional vector drawings in thin air.

The work was originally commissioned by the Festival of Lights Lyon 2015, and developed in cooperation with local producer Tetro. Due to the festival’s cancellation after the tragic events in Paris, Berliners had the unique chance to attend an exclusive preview before the project will be presented in December 2016 in Lyon for the Festival of Lights 2016.

An artist and designer working in the fields of light and installation art, media design and scenography, Christopher Bauder focuses on the translation of bits and bytes into objects and environments, and vice versa. Space, object, sound, light and interaction are key elements of his work. In 2004 he founded the multidisciplinary art and design studio WHITEvoid, which specializes in interactivity, media, interior architecture, and electronic engineering.

Bauder has brought his installations and performances to art events and spaces around the world, including Centre Pompidou Paris, MUTEK Montreal, Festival of Lights Lyon, Luminale Frankfurt, The Jewish Museum Berlin and The National Museum of Fine Arts in Taiwan. He is best known for his city-wide light art installation “Lichtgrenze”, created in 2014 together with his brother Marc, for the 25th anniversary of the Fall of the Berlin Wall and his large scale kinetic live shows ATOM and GRID. Both in cooperation with Robert Henke.

Alongside his numerous releases as Monolake, Robert Henke is also well known for the music, audiovisual installations and performances he has been creating under his own name since the early 90s. Due to his background in engineering and fascination with the beauty of technical objects, the development of his own instruments and algorithms has always been an integral part of his creative process. Henke also co-developed the omnipresent Ableton Live music software, which since its invention in 1999 has become the standard tool for electronic music production and completely redefined live performance practice. 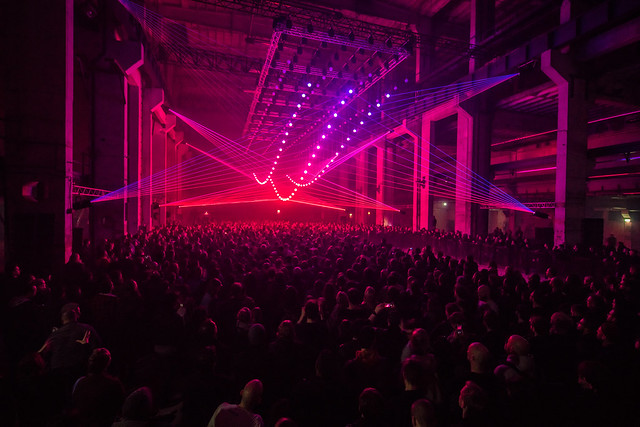 awesomeness
Weddell seal vocalizations are cooler than your synthesizer, and we’re still learning more
Germany
Hard as queer: Brutal Gegen releases and videos capture a party that’s defiant as ever
av
Houdini’s tricks: inspiration and tutorials for the essential free-to-start visual tool
berlinGermany
Beirut Synthesizer Center at Superbooth, on sharing and music in times of crisis