Native Instruments got a huge chunk of investment to grow

NI apparently wanted a reveal here. With Amsterdam Dance Event looking more like Pioneer turf these days – that company is dominant with CDJs and mixers and now even turntables, and had its own sampler on hand – NI got the attention of DJs at the keynote.

But what does it mean that the Berlin-based company got 50 million Euros? Well, some points to consider:

50 million is a lot. This is a lot for a company in the musical instruments sector of the business. Our quiet little corner of stuff for electronic musicians has begun to see some action, it’s true. For instance, Focusrite PLC (parent of Novation) made an initial public offering in 2014, and ROLI saw an unprecedented $27 million Series B funding back in 2016.

But 50 million euros opens up the possibility of significant investment. (Despite all that cash, NI retains its private ownership.)

The money is coming from a firm linked to music and pop stars. Billboard wrote the best piece I’ve seen on this yet:

So who are EMH? Well, they’re led by a bunch of white German guys in matching blue suits, who look like the people at the front of the queue for first class on your Lufthansa flight or an a Capella vocal quartet, or both.

But, apart from that, EMH are fairly interesting. You won’t gather much from their Website. (Example: they say they have “a special focus on consumer, retail, software, technology, financial services, business services, and health care.” That… doesn’t narrow it down much.) 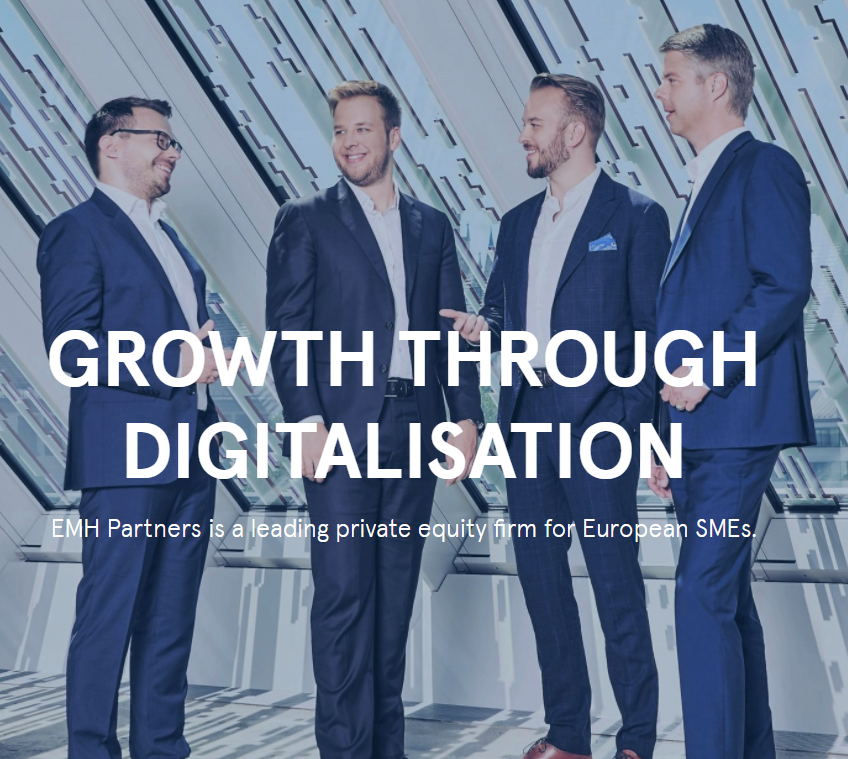 Blue [Suit] Man Group. Why are these men smiling? Well, apparently their funds help digital services to grow – now including whatever NI are planning next.

I can translate, though. They help companies offering digital services grow. And they’ve got money to do it. The clients may shift – one of their previous big investments was in a tire e-service company (those round rubber things on cars), called Tirendo. And there was a search engine for vacation rentals. Plus a company with really futuristic lights.

NI were ahead of the curve on figuring out software would help musicians. They started simple – with things like a Hammond organ emulation and guitar effects. So now, it seems the gamble is what services would extend to larger groups of musicians.

NI will probably hire people. The one concrete piece of information: expect NI to hire new people to support new growth. So this is really about human investment.

NI already are established and successful. It’s also worth saying, NI aren’t a startup. They have not one, but multiple successful product lines. They’re established around the globe, in both software in hardware. They’re not getting investment because they’re burning cash and need to keep the lights on (cough, SoundCloud). This is money that can go directly into growth – without threatening the existing business.

So, about that growth —

What are they going to spend this on? This part is unclear, but you can bet on “services” for musicians, with musicians defined more broadly than the audience NI reaches now. This most important parts of the press release NI sent last week deal with that – and mention “breaking down the barriers to music creation.”

Over the past 12 months the company has made key hires in Berlin and Los Angeles, including the former CEO of Beatport, Matthew Adell. These specialized teams have commenced development of new digital services designed to redefine the landscape of music creation and the surrounding industry over the next year.

Here was my commentary on Adell at the time:

What does it mean that NI bought a startup that monetizes remixes?

Service – for what? Here’s the mystery: what will these services actually do?

It seems that the means of “breaking down barriers” – and playing on relationships with the likes of “Alicia Keys, Skrillex and Carl Cox” (mentioned in the press release) – is all about letting people remix music.

Of course, this makes yesterday’s news from ROLI seem a little desperate, as their initial remix offering just covers that earworm you finally got out of your head about a year ago, Parrell Williams’ “Happy.” NI have a significant headstart.

But it should also raise some red flags: that is, NI have the contacts, the brains, and the money, but what problem will they solve for music lovers, exactly? Dreams of growth do often hit up against simple realities of what consumers actually do turn out to want and what they want to pay for.

There’s not much in the Magic Eight Ball here now, though, so – let’s see what the actual plan is. (It could also be that this has nothing to do with remixes at all, and the value of Adell is unrelated to his previous gig in remix monetization.)

NI aren’t alone in services, either. Apart from Roland’s somewhat strange Cloud offering (which is mainly a subscription plug-in offering with some twists), Cakewalk now have something called Momentum – a subscription-based service and mobile/desktop combination that promises to take ideas captured on your phone and easily load them into your DAW.

What are these NI executives actually saying with these words?

Or, to translate, “like, a bunch more different people.” (Fair. There is demand from a bunch more of y’all people folks – and I’m not even kidding.)

Mate Gallic, the CTO/founder – and someone whose past life as an experimental electronic artist will be familiar to CDM readers – also has learned to speak corporate.

“We believe music creation products and services should be integrated in a more appealing, intuitive and cohesive way,” Mate Galic, CTO and President of Native Instruments, said in a statement. “We foresee an easily accessible music creation ecosystem that connects user centric design, with powerful technology and data, to further enable the music creators of today, and welcome the new creators of tomorrow.”

(Don’t worry, Mate and Daniel do talk like normal human beings outside of company press releases!)

Translation: they want to make stuff that works together, and it’ll use data. Also fair, though some concerns, Mate: part of what makes music technology beautiful is that the “ecosystem” doesn’t come from just one vendor, and some of it is intentionally left unintuitive and non-cohesive because people who make music find its anarchy appealing. You could also take the words above and wind up with a remix app that uploads to the cloud, a combination of Facebook and a DAW, or… well, almost anything.

So, they’ll be spending 50 million on a service that does something for people. Music people. Guess we have to wait and see. (Probably the one thing you can say is, “service” implies “subscription.” Everything is Netflix and Amazon Prime now, huh?)

The big challenge for the whole industry right now is: how do we reach more people without screwing up what we’ve already got? With new and emerging audiences, how do you work out what people want? How do you bridge what beginners want and need with what an existing (somewhat weird) specialized audience wants and needs?

For NI, of course, I’m sure all of us will watch to make sure that this supports, rather than distracts from, the tools we use regularly. (It’d certainly be nice to finally see a TRAKTOR overhaul, and I don’t know if there’s any connection of its fate to what we’re seeing here – very possibly not.)

I’ll be sure to share if I learn more, when the time is right. I am this company’s literal next-door neighbor.

Leave this free software running, and it’ll come up with rhythms for you

Germany
Hard as queer: Brutal Gegen releases and videos capture a party that’s defiant as ever
analysis
All the big Apple news from WWDC, at a glance
berlinGermany
Beirut Synthesizer Center at Superbooth, on sharing and music in times of crisis
berlin
Catch Berlin CTM Festival talks, music, and audiovisuals online, from anywhere