Novation now let you Launchpad with just a browser

Novation’s new Web interface means you can play with their Launchpad grid with just a browser, or just browser plus hardware.

We talk a lot about making music more accessible through technology, but the truth is the reason we’re having this conversation is that technology has made things a lot less accessible. There are countless musical instruments you can pick up and play. Even some really sophisticated instruments – the marimba, the piano, the autoharp (for a folk example), your own voice – all give you some sound without requiring any initial training. (Mastery can come later.)

Or to put it more bluntly – no acoustic instrument requires you to check your operating system version and install software and configure audio drivers. (Cough.) You get my drift. Your serious desktop software isn’t going anywhere, but there’s clearly a need for a starting point. 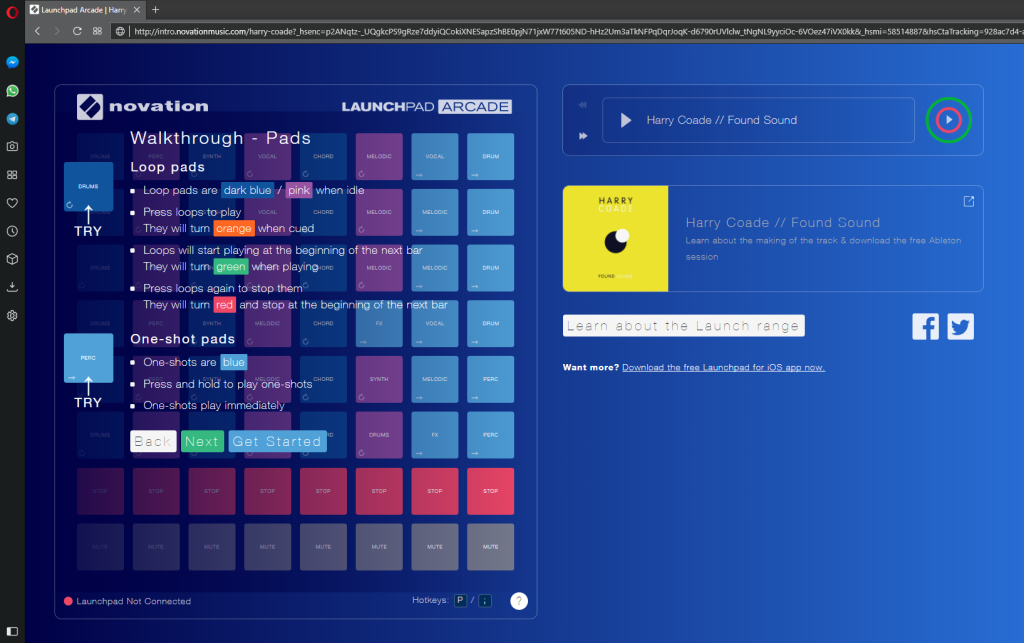 Novation have already embraced Web technology as a way of configuring hardware and adding sounds, as with Circuit Components. Now, that Web tab can turn into a toy for making music.

Don’t have a Launchpad? Now anyone can try the grid in the browser, to see what a grid interface feels like.

Just brought home a Launchpad from the shop? Plug it in, fire up a browser, and start playing. Once that’s working, you can always tackle installing and using Ableton Live Lite (or another tool) later.

If you’re already up and running on a Launchpad controller (or another grid, like Push or monome or Maschine), this isn’t terribly meaningful. But another clue that more is coming is in the name: Launchpad Arcade suggests other applications could appear, like the light shows people are fond of running from the grid. (It’d be great fun to plug in your Launchpad and share some animations in the browser – or even do a little sound-reactive toy. Heck, you could realize the original dream of the Tenori-On and turn it into an animated clock or play a game. Grids everywhere…)

Have at it! You get some fun features – loops, one-shots (sounds you trigger directly that play just once), and channels for different parts.

Getting started on Launchpad

The Launchpad isn’t the fanciest grid out there these days, by far – but maybe its simplicity is itself an advantage. You really just focus on the grid and sample functionality, and the Launchpad range are lightweight enough to move informally around the studio. They’re also streamlined enough that they’re dead-simple to program as MIDI controllers.

Alongisde this launch, Novation have a nice portrait of how one artist is working with the tool, as Harry Coade shows sampling and musical process:

It’s a shame that audio and MIDI aren’t more widely standardized in the industry. Google are leading in browsers as some other browser developers drag their feet. (Apple and Microsoft are especially guilty there; Mozilla actually led the way but now is playing catchup – their new browser is great, so I’m hopeful they revisit this on that platform.) And then Google are lagging when it comes to support in their own Chromebook line – which defies any logic, since this sort of tech would make even more sense in Chrome OS. That’s especially disappointing as educational buyers increasingly embrace Chromebooks in schools.

Then again, that’s why even simple proof-of-concept stuff is so important.

You can play with this.

And hopefully one of us can shove it in the face of some developers to get better support for this tech.

R is a reactive, emotional robot speaker from Teenage Engineering