Arturia refreshed their mega-collection of synths and keyboard instruments, with new sought-after additions – including a recreation of the Buchla Easel.

Get ready for some numbers and letters here here. The resulting product is the Arturia V Collection 6. The ancient Roman in me apparently wants to read that as “5 collection 6” but, uh, yeah, that’s the letter “v” as in “virtual.”

And what you’re now up to is 21 separate products bundled as one. Inception-style, some of those products contain the other products, too. (If you just want the Buchla, sit tight – yes, you can get it separately.)

So, hat we’re talking about is this:

Synths: models of the Synclavier, Oberheim Matrix 12 and SEM, Roland Jupiter-8, ARP 2600, Dave Smith’s Sequential Prophet V and vector Prophet VS, Yamaha CS-80, a Minimoog, and a Moog modular. To that roster, you can now add a Yamaha DX7, Fairlight CMI, and a Buchla Music Easel.

And some pianos. Various pianos – uprights and grands – plus other parameters via physical modeling are bundled into Piano V.

The bundle also includes Analog Lab, which pulls together presets and performance parameters for all the rest into a unified interface.

This isn’t all sampled soundware, either – well, if it were, it’d be impossibly huge. Instead, Arturia use physical modeling and electronics modeling techniques to produce emulations of the inner workings of all these instruments.

About those new instruments…

There’s no question the Clavinet and DX7 round out the offerings, making this a fairly complete selection of just about everything you can play with keys. (Okay, no harpsicords or pipe organs, so every relatively modern instrument.) And the Fairlight CMI, while resurrected as a nifty mobile app on iOS, is welcome, too. But because it’s been so rare, and because of the renaissance of interest in Don Buchla and so-called “West Coast” synthesis for sound design, the Buchla addition is obviously stealing the show.

Here’s a look at those additions: 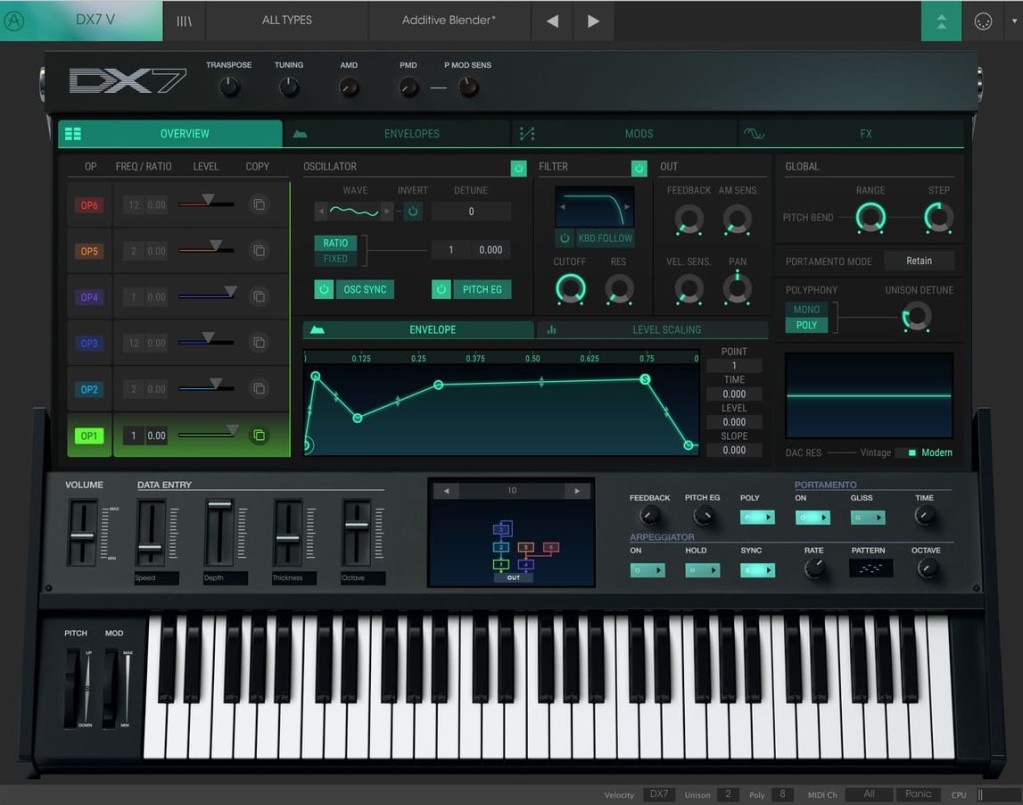 The DX7 V promises to build on the great sound of the Yamaha original while addressing the thing that wasn’t so great about the DX7 – interface and performance functionality. So you get an improved interface, plus a new mod matrix, customizable envelopes, extra waveforms, a 2nd LFO, effects, sequencer, and arpeggiator, among other additions. 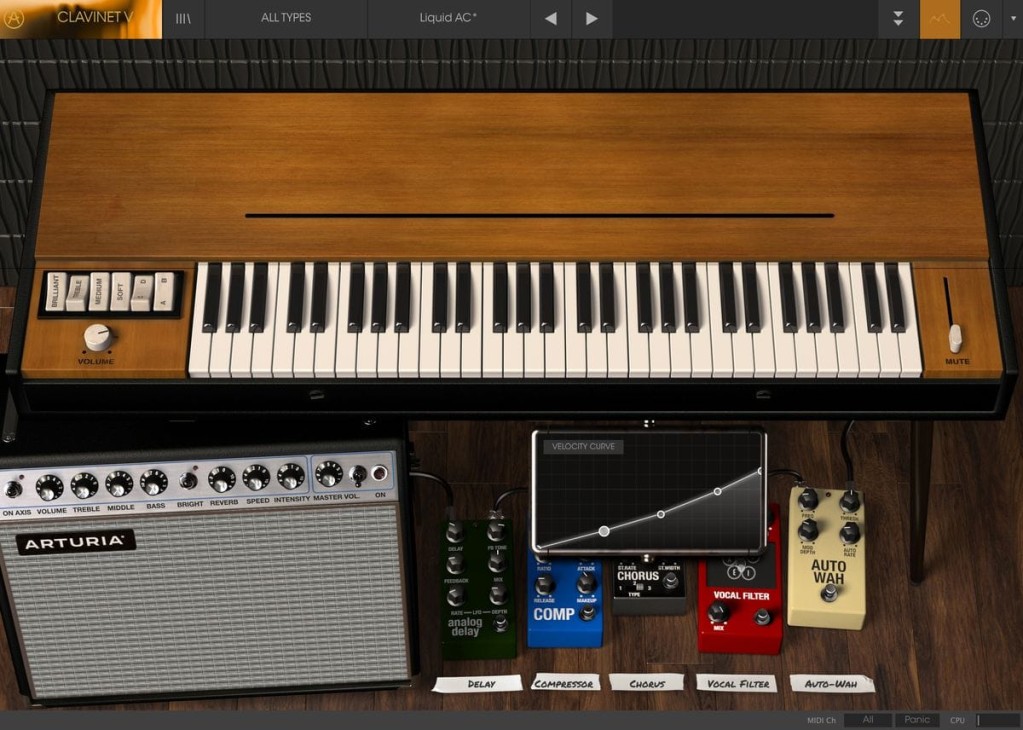 Funk fans get the Clavinet V, with control over new parameters via physical modeling (in parallel with the Arturia piano offering), and the addition of amp and effect combos.

Okay, but let’s get on to the two really exciting offerings (ahem, I’m biased): 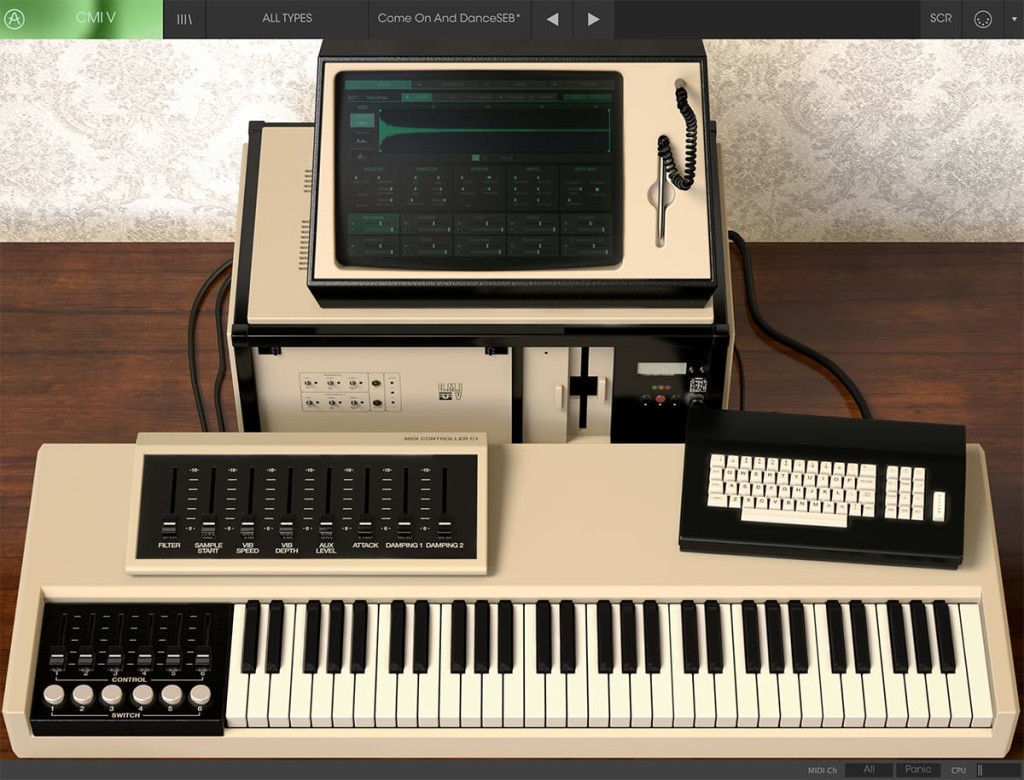 The CMI V recreates the 1979 instrument that led the move to digital sampling and additive synthesis. And this might be the first Fairlight recreation that you’d want in a modern setup: you get 10 multitmbral, polyphonic slots, plus real-time waveform shaping, effects, and a sequencer. And Arturia have thrown us a curveball, too: to create your own wavetables, there’s a “Spectral” synth that scans and mixes bits of audio.

I’m really keen to play with this one – it sounds like what you’ll want to do is to go Back to the Future and limit yourself to making some entire tracks using just the Fairlight emulation. If you read my children’s TV round-up, maybe Steve Horelick and Reading Rainbow had you thinking of this already. Now you just need a PC with a stylus so you can imagine you’ve got a light pen. 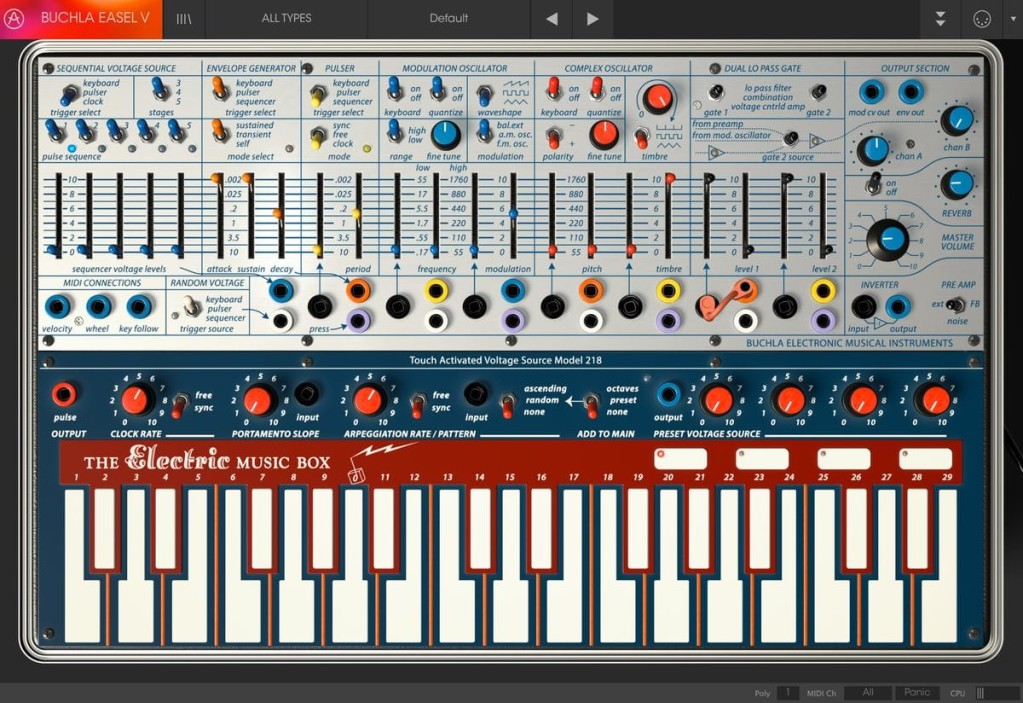 The Buchla Easel goes further back to 1973. It’s arguably the most musical of Don Buchla’s wild instruments, bringing the best ideas from the modular into a single performance-oriented design. And here, it looks like we get a complete, authentic reproduction.

Everything that makes the Buchla approach unique is there. Think amplitude modulation and frequency modulation and the “complex” oscillator’s wave folding, gating that allows for unique tuned sounds, and sophisticated routing of modulation. It all adds up to granting the ability to make strange, new timbres, to seek out new performance life and new sound designs – to boldly go where only privileged experimentalists have gone before.

Arturia makes up for the fact that this is now an in-the-box software synth by opening up the worlds of modulation. So you get something called “gravity” which applies game physics to modulation, and other modulation sources (the curves of the “left hand,” for instance) to make all the organic changes happen inside software. It’s a new take on the Buchla, and not really like anything we’ve seen before. And it suggests this software may elevate beyond just faux replication onscreen, with a genuinely new hybrid. 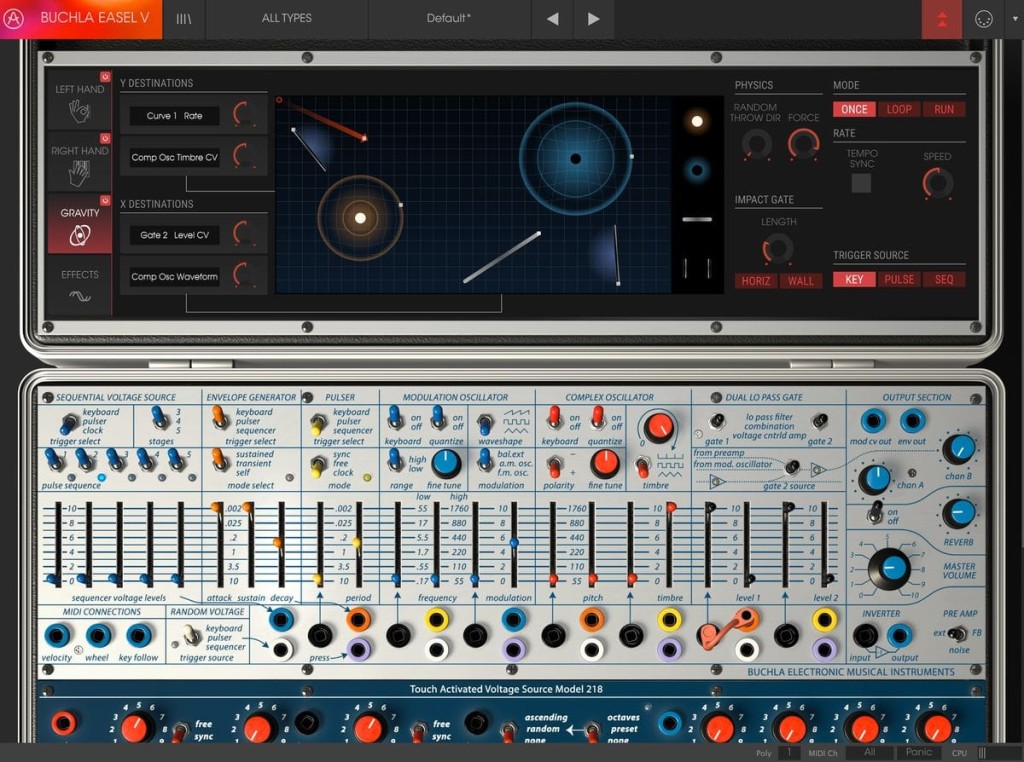 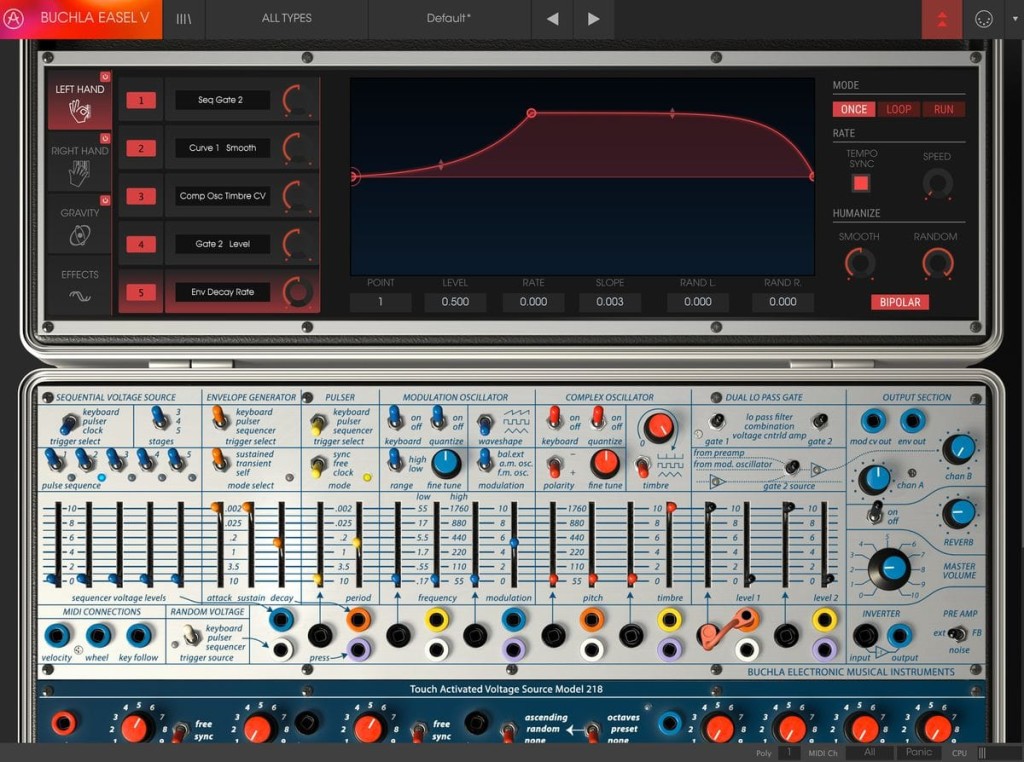 My only regret: I would love to have this with touch controls, on iOS or Windows, to really complete the feeling. It’s odd seeing the images from Arturia with that interface locked on a PC screen. But I think of all the software instruments in 2017, this late addition could be near the top (alongside VCV Rack’s modular world, though more on that later).

But it’s big news – a last-minute change to upset the world of sound making in 2017.

Watch for our hands-on soon.

Also new in this version: the Analog Lab software, which acts as a hub for all those instruments, parameters, and presets, now has been updated, as well. There’s a new browser, more controller keyboard integration, and other improvements.

There are improvements throughout, Arturia say.

There’s also a lower intro price: new users get US$/€399 instead of 499, through January 10. (Existing Arturia customers may get additional discounts above that.)

And that Buchla is 99 bucks if that’s really what you want out of this set.

A guide to VCV Rack, a software Eurorack modular you can use for free

MacSoftwareWindows
AudioSlide plays advanced MPE ramps even without hardware – Max for Live
MacPlug-insSoftwareWindows
data.train Max for Live instrument-effect mangles and transforms any sample or source
historySoftware
PsyTexx is a forgotten tracker for Palm PDAs – with features like distortion
MacSoftwareWindows
Inflation, begone: SunVox is still donationware, and 2.1 makes it slicker and more powerful