TX Modular is a vast, free set of sound tools in SuperCollider

Granulators, drones, mixing, synths, effects, control, and on and on – TX Modular is an insanely huge set of tools, and the cost is zero.

SuperCollider, the free and open source sound creation environment for Mac, Windows, and Linux, is vast and powerful. The problem is, actually getting into it is … a little arcane. Talk to many frequent SuperCollider users, and what you’ll find is that they’ve assembled personal libraries of code snippets to work with it. So it can feel a bit like trying to talk your way into a secret society, if you’ve come from another sound creation environment.

Paul Miller writes to share his TX Modular System, which gives you the keys to a huge treasure trove of modules, and some easier ways of combining them.

All of this also means you don’t have to touch SuperCollider code if you don’t want to – though you can add that, too, if you like. (And you can run some code without having to build everything else you need from scratch.)

And it’s all just kind of mind boggling. Just to give a small overview, you get – among other things:

Synths and drones. In addition to the more conventional stuff you’d expect, there are a range of unique morphing synths, wave terrain instruments, drone and noise makers – rare, creative stuff. And there are polyphonic synths with a special emphasis on physical modeling and filter-based sound. 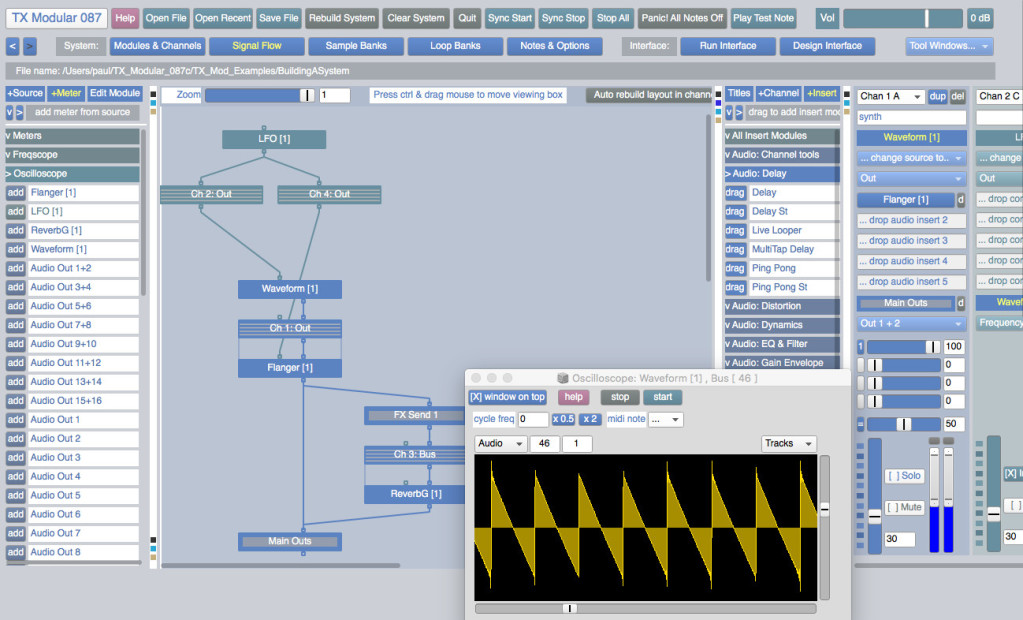 Samples and granulators. Grains are part of the appeal of SuperCollider – these instruments have lots of variations to experiment with sound, plus more conventional players, loopers, and sample-based synths.

Mixing and processing. Need a Mid-Side encoder? Faders? It’s there, too.

Control. Arguably, the rise of Eurorack modular has renewed the interest in actually getting creative and musical with patching itself. So, here you get clock dividers and a rich variety of envelopes and the like, in addition to basic LFOs and such. And at the same time, you get modulation that’s only possible in the digital realm, like random walks and Perlin Noise (a particular digital algorithm with nice, organic results), plus physics models of balls and springs.

Hardware input. Here, too, you get some of the advantages of the computer: work with OpenSoundControl natively, add Wiimotes, plenty of MIDI processors, and more.

Sequencers. Most modular environments break down when it comes to the sort of sequencing in DAWs – but not here. There are scale, chord, note processing, and piano roll sequencers, not just some limited step sequencers. You can even work with multiple tracks or use sequencers for modulation and actions.

UI. For building interfaces, you get various widgets for knobs and sliders.

And of course, you still have SuperCollider for extending all of this, with convenient modules for adding your code to the modular environment.

A mature release is out now as of last month, with a powerful new multitrack sequencer and note processing, FM granulator, a new reverb, and module improvements. (In case you were already up and running with TX, you’ll find what’s new in this release, entitled 087, included in the release notes.)

It’s almost ridiculous that Paul has created this for free. But it’s a beautiful, completely open source solution:

On Mac, you can download a standalone, but the whole environment works on Mac, Windows, and Linux so long as you install SuperCollider first.

Ableton Live 10 arrives: how you’ll use it, what it means for Max for Live