Singing – it’s the simple most important human instrument, but it’s too often overlooked in technology. iZotope has doubled up on innovations there with Vocal Synth 2 – and in case you haven’t been keeping track, they’ve bundled all their production tools together into the new Creative Suite.

Vocal Synth was already a compelling, semi-modular set of tools for processing vocals and applying vocal tech to incoming signal – something you can do creative stuff with whether you’re a singer, or a producer who sings, or a producer working with vocalists, or a producer pretending you can sing. (Yes, it’s useful even on other inputs, even if you lack the vocal chops yourself.)

It’s really, really good, but – the one thing I sort of expected when I first heard about the product was something like physical vocal modeling in the box. Now, sure enough, they’ve added just that.

Biovox: A module for physical modeling of the human vocal track (with “science,” say iZotope), from nasality to formants. This isn’t something like Vocaloid – it’s not about voice synthesis or faking vocals – but in a way, it’s something more musically useful, a model of all the good stuff that happens inside your vocal tract and the resonant cavities in your head, delivered as an effect. That’s really important, because our perception is trained to take all this sort of nuance for granted.

Advanced sound, advanced controls. So, hiding controls doesn’t always make things more intuitive – sometimes you actually want to dive down and get something that’s missing in the panel. iZotope say they’ve both improved the sound model, and added the ability to get advanced control over parameters, including “access to Vocoder band controls, per module Oscillator presets, and per module panning and filters.”

Integration with other plug-ins. Since iZotope are selling their production stuff as a suite, they’ve also added the ability for Vocal Synth 2 to show up in Neutron 2’s Masking Meter and Visual Mixer, and in Tonal Balance Control. That means a nice chance to apply Vocal Synth where it does – and doesn’t – belong.

I definitely will review this one soon; this stuff is very much up my alley, and a lot of yours’, I’m sure, too. 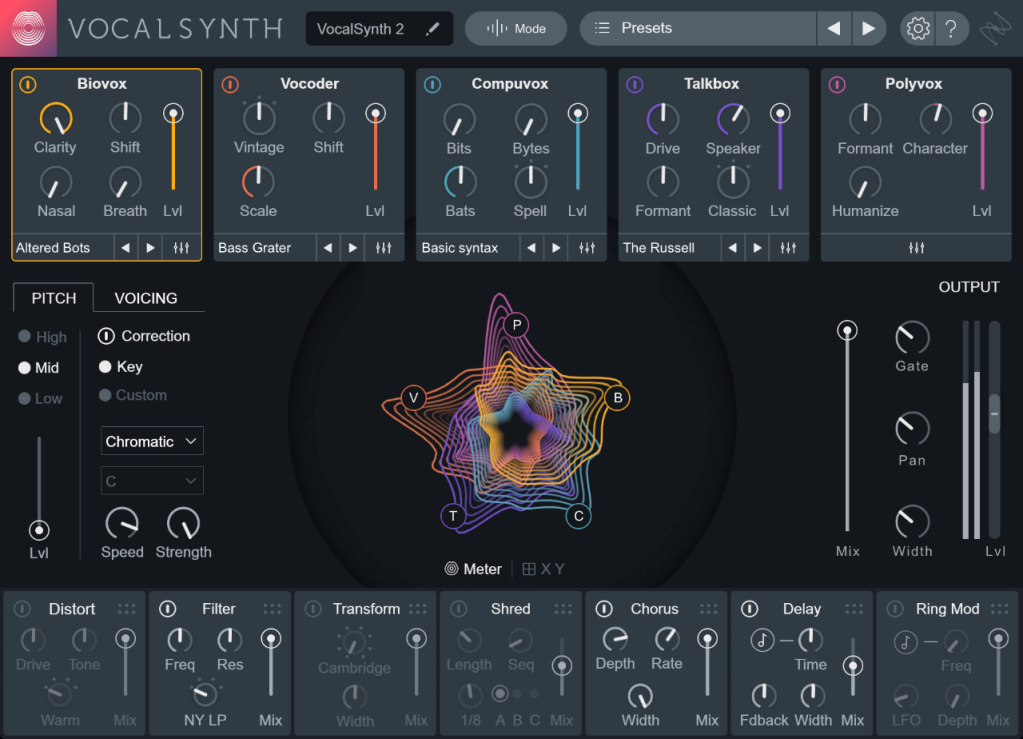 Okay, those of us who also do design or video editing work may shudder and think of big monthly subscription fees from Adobe when we read those words but – don’t panic.

Creative Suite is just the new bundle of iZotope production tools. While they may be more well known for mastering and post production offerings, iZotope have applied sonic science to an impressive and unique stable of stuff you’d use when actually making the music and designing sounds. So, what had been “Creative Bundle” is now the more complete “Creative Suite.”

Included: VocalSynth 2, Iris 2, Trash 2 Expanded, BreakTweaker Expanded, Stutter Edit, DDLY, and Mobius Filter. (I’m pretty sure someone caught on that filter, because I’ve heard it cropping up in new releases. Don’t know if that’s CDM’s fault in part or not. But it is great fun.)

You can buy Creative Bundle for US$349 now, a steep discount, and then get the bigger Suite when it ships – including the new VocalSynth 2. See:

There are of course equivalent suites for the other interest areas – an RX Suite for post production and correction/cleanup, plus the O2N2 Bundle that covers mixing and mastering, including the industry favorite Ozone.

Yeah, Ozone – there are definitely some mastering engineers out there keeping big racks of impressive looking gear, then, like, doing most of the mastering on Ozone. (And why not? Just sayin’. Ducks…)

All the best new gear and modules from Superbooth, in one place