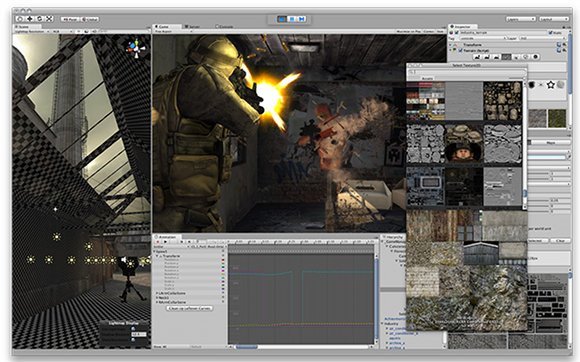 Unity, the commercial game engine, has long been a development tool of interest to those working not only in games but other live and interactive 3D visuals. In contrast to traditional tools, Unity is simply friendlier to designers and programmers alike. It’s what you’d imagine a game engine to be. After first attracting developers on the Mac, Unity has since become a powerhouse on various platforms.

Interestingly, it’s all powered by the open-source Mono, a free version of Microsoft’s .net platform (and a painful reminder to Java advocates of what Java could have been). You can read a case study of that success story; PDF only.

You can see an overview of the features that most excite the dev team on the Unity blog. One big highlight, as I profiled today on Create Digital Music, is new real-time audio capabilities. That could make this an ideal choice for people looking to build innovative new audiovisual environments.

All in all, it clearly makes Unity the environment to beat for independent creators.

I still long for a strong game engine choice for open source developers, one built on higher-level languages than C++ (or using something other than primitive bindings to C++ engines). I don’t imagine such an environment would ever compete directly with something like Unity; on the contrary, it could go in other, more experimental directions than a more comprehensive commercial game would, and conceivably be more lightweight. PyGame, jMonkeyEngine, and the Blender Game Engine are a few examples that might fill the category; I’m curious if readers are using any of these (Unity included).

Unity’s place is clear, though; they’re doing extraordinary work and reshaping the notion of what a game engine is. Stay tuned for that version 3 release.