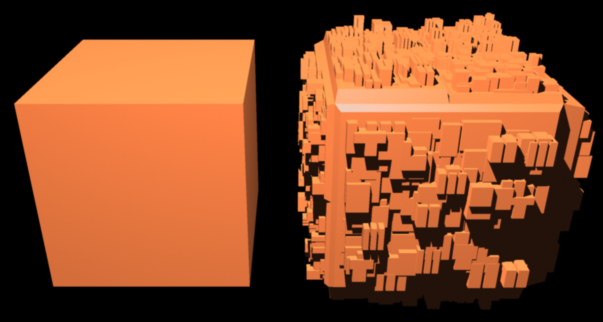 Ah, digital geometry: as if caught eternally in a sterile, detail-less vacuum, the problem with virtual models can be that they’re too perfect, too abstract. So, following on the use of model kitbashing techniques to make more convincing graphics in the game Hawken, as we saw this week, here’s more on the idea.

Wikipedia (somewhat surprisingly) has a great article on the use of “greebles” to make (physical) models look less bare. Model-makers, whether working with physical models or virtual, run into the same problem – and can employ the same solution. It’d be doing a disservice to their art, perhaps, to say they fix the issue by “gluing a lot of junk to bare surfaces,” but that’s the basic idea.

What’s significant is not only that these provide realism by adding detail or making things look rougher, but that they add a sense of scale. And that’s perhaps the biggest issue with looking at virtual models: there’s nothing against which one can find scale. The expert model maker is partly able to make their work convincing by the deft use of forced proportion.

The timeline of the technique, as related to the use of a word for it, anyway:

1968: The modeling team for Kubrick’s 2001 knew something about real spaceships – especially with NASA veterans Fred Ordway and Harry Lange onboard, who had worked with Werner Von Braun. (Lange went on to work on the Star Wars trilogy.) The word for the use of the surface details: “wiggets”.

1977: Star Wars comes on the scene, covered in kit-bashed parts. To make ships look realistic, bare surfaces are festooned with pieces of model kits and even the odd plastic soldier – anything to break up the flat planes. Allegedly, Industrial Light and Magic model-makers coin the term “greebles” (or “greeblies”). You can read a superb 1993 Wired articl,e probing the depths of technique, modeling, and philosophy, by Rudy Rucker:
Use Your Illusion: Kit-bashing the cosmic matte. (Issue 4!) 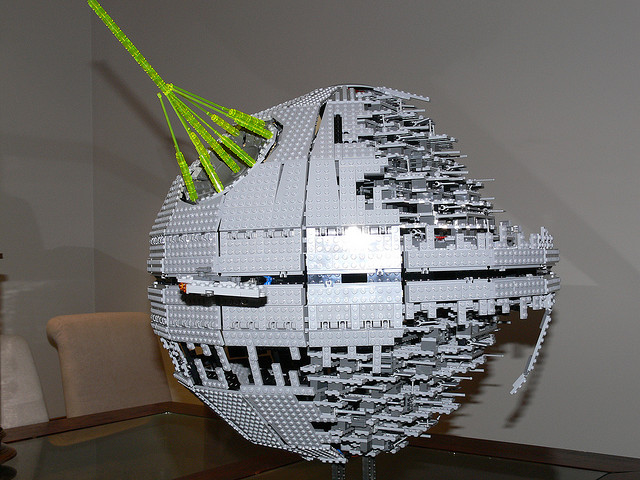 We include a lot of pieces from standard model kits. See that there, it’s the conning tower of a submarine, and here’s the hull of a destroyer ship, and this down here is the front of a jet plane, and up here is part of a helicopter.

And in that story, skin textures, too, were a subject of digital manipulation, as ILM took on the dinosaurs of Jurassic Park:

As a final touch, the skin textures were lightly roughened with computer- generated chaos to give them the indefinable level of detail that characterizes real-world images.

In a sign of this coming in circles, while Rucker had interviewed ILM in the 70s, they used the term “kit-bash” – which comes from conventional modeling, not special effects per se. The aforementioned Wikipedia article was brought to his attention by legendary futurist Bruce Sterling. And he looks to:

1950s: Allen Ginsberg describes the perceptual impact of moving between contrasting colors as being an “Eyeball Kick.” (That suggests all sorts of digital possibilities beyond just adding three-dimensional details to models, kit-bash style.)

Rucker also has a brilliant set of notes for a planned keynote at San Francisco’s experimental sex and art conference, Arse Elektronika (not a typo):
Sex and Greebles
— and he wonders, brilliantly, “would sex even be possible without greebles?”

1990s: Ron Thornton of the pioneering CG firm Foundation Imaging (Amiga-powered, as I recall!) called their translation of the greeblies to digital models “nurnies.” So says, at least, Charles Adams, who brought the same aesthetic and techniques to the 2004 (all-CG) Battlestar Galactica.

You can write programs to procedurally decorate any surface with greebles; it’s a process similar to fractalization, that is, you divide up the surface into square are triangles and randomly add a bump or a hollow here and there. If you like, you can do this recursively for several levels, that is, rather than adding a bump or a hollow to a square, you subdivide the square into yet smaller squares and greeble those tiny squares.

Now, there are plug-ins for the task, and I’m sure any number of possible shaders. But I rather like the idea of each artist reinventing the solution – much in the way that there are plenty of different ways to glue a bunch of spare plastic model parts to a piece of plywood.

What will you greeble? I’ll be curious to see. Great visuals can, perhaps, even be better than sex.

First Look at Roland Jupiter-80, Images, and Reflections on the Jupiter Legacy