We’ve seen lots of new controllers that are designed to be more responsive to gestures. But can they actually make new sounds, to match? ROLI and FXpansion have a new soft synth that’s designed for that.

It’s called Cypher2, and it builds on the past (award-winning, no less) software instruments from FXpansion, but now built from scratch so that you can access all those deep sound parameters just by moving your hands – not only by messing around with on-screen parameters.

And it sounds lovely:

ROLI have joined smaller makers like Madrona Labs, Roger Linn Instruments, and others in making new controllers that respond to more than just plucking keys or hitting drum pads. But the London-based company sets itself apart with something else – funding. So they’ve got Pharell Williams as a creative office, partnerships with the likes of Apple retail, and they bought up some of the unique, weird talent that makes music technology – including plug-in developer FXpansion, who also call London home. (That buyout took place in 2016.)

Now, when Apple go buy a plug-in maker, you can bet you’ll watch its products become exclusives for Logic and GarageBand. But when ROLI buy someone, you instead get interoperable software that takes advantage of ROLI’s forward-thinking instruments.

Translation: now when you prod and slide about the squishy keys of a ROLI Seaboard RISE or Seaboard Block, you can make fabulous sounds. Dig into your computer screen, and you can shape those sounds yourself. 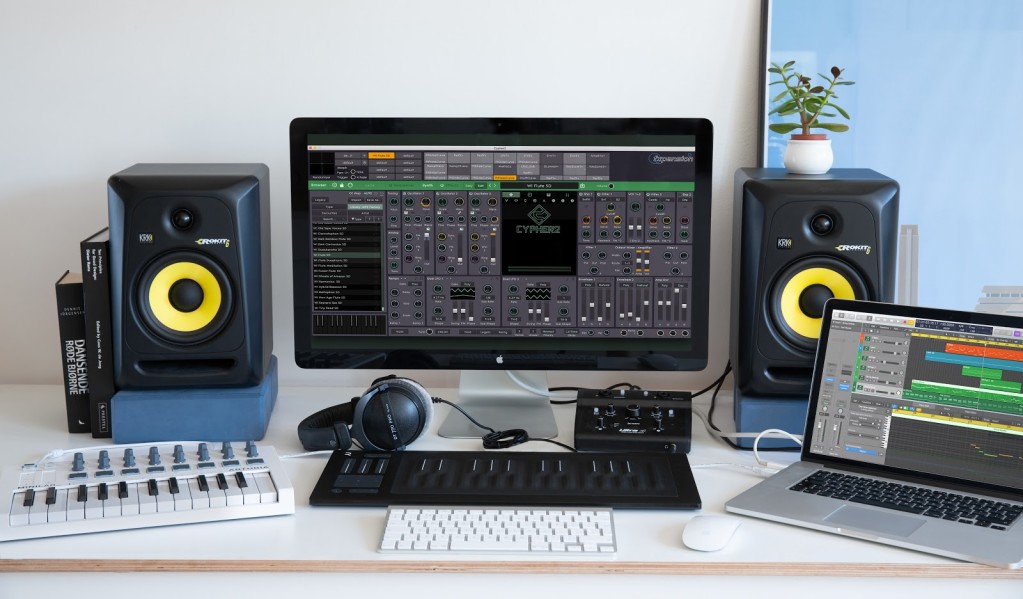 And now that expressive control is part of MIDI (in the form of a protocol called MPE), this software sees both host support (Bitwig Studio, Cubase) and hardware support beyond just what ROLI make (like the Linnstrument, if you like).

ROLI and FXpansion call these sounds “5D,” but that is to say, many aspects of the sound are there underneath your hands. And that’s of course the way of things with acoustic instruments – even the acoustic piano responds with nuanced sound to the ways you press and release keys, even if this has been grossly simplified in the piano as represented in digital form.

This isn’t the first ROLI synth, but if you weren’t won over by Strobe2 and Equator, Cypher2 offers a bunch of new sound horizons and what ROLI say are the largest-ever bank of MPE-specific sounds. And you get a rich set of physically modeled and analog modeled sounds, producing lots of organic sounding instruments that are both familiar and futuristic.

I mean, it just sounds great. It’s been a while since I was this interested in a soft synth – and to me it’s the first new soft synth to really get excited about using MPE.

And if you want a cheaper / more portable solution, yes it works with the Blocks line, too:

What’s inside? Modeled analog circuitry and FM, deep modular-style synthesis capabilities, and loads and loads of modulation – again, normally stuff you’d find only on big modular rigs, but here with all the conveniences and powers of digital.

It’s kind of an in-the-box producer’s dream, only now made more accessible to actually playing that depth with controllers.

Modulate the master sequencer with 3 mod sequencers and an expanded control matrix
Improved interface with real-time animated modulation, full signal flow visuals and preset descriptions
Default MIDI CC mappings for both 2D and 5D controller types
6 circuit-modelled filter types, each with a varied set of responses, including a comb filter model with 8 comb types
Scalable interface for 4K/retina screens with a variety of themes
LFOs are expanded with clock-divided sub-LFOs for synchronisation or free-running modulation
Updated envelope shapes for precise control
Feed your creativity with preset morphing and randomisation
Support for microtonal Scala .TUN files

Hands-on: Roland’s #808day upgrade for the TR-8S is a blast to play