Max is now 30 years old, with a direct lineage to the beginning of visual programming for musicians – creating your own custom tools by connecting virtual cables on-screen instead of typing in code. Since then, its developers have incorporated additional facilities for other code languages (like JavaScript), different data types, real-time visuals (3D and video), and integrated support inside Ableton Live (with Max for Live). Max 8 actually hits all of those different points with improvements. Here’s what’s new:

It’s always been possible to do multichannel patching – and therefore support multichannel audio (as with spatial sound) – in Max and Pure Data. But Max’s new MC approach makes this far easier and more powerful.

So, yes, this is about multichannel audio output and spatial audio. But it’s also about way more than that – and it addresses one of the most significant limitations of the Max/Pd patching paradigm.

MPE assignments (from controllers like the Linnstrument and ROLI Seaboard)? MC.

MC means the ability to use a small number of objects and cords to do a lot – from spatial sound to mass polyphony to anything else that involves multiples.

It’s just a much easier way to work with a lot of stuff at once. That was present in open code environment SuperCollider, for instance, if you were willing to put in some time learning SC’s code language. But it was never terribly easy in Max. (Pure Data, your move!) 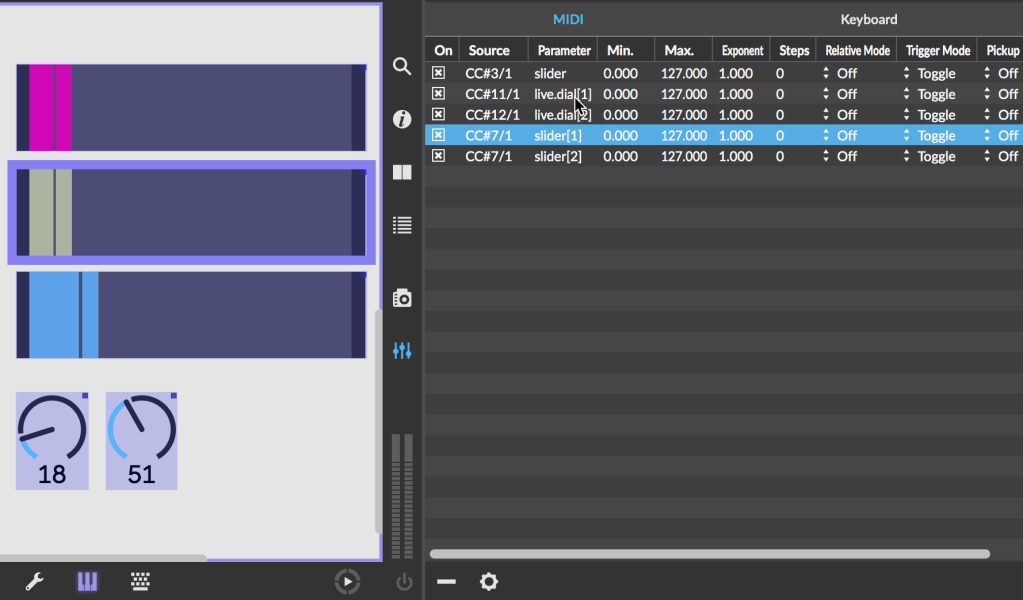 Mappings lets you MIDI learn from controllers, keyboards, and whatnot, just by selecting a control, and moving your controller.

The whole implementation looks very much borrowed from Ableton Live, down to the list of mappings for keyboard and MIDI. It’s slightly disappointing they didn’t cover OSC messages with the same interface, though, given this is Max.

Also, Max 8’s Vizzie library of video modules is now OpenGL-accelerated, which additionally means you can mix and match with Jitter OpenGL patching. (No word yet on what that means for OpenGL deprecation by Apple.)

This is I suspect a pretty big deal for a lot of Max patchers who moonlight in some JavaScript coding. NodeJS support lets you run Node applications from inside a patch – for extending what Max can do, running servers, connecting to the outside world, and whatnot.

There’s full NPM support, which is to say all the ability to share code via that package manager is now available inside Max.

Patching works better, and other stuff that will make you say “finally”

Actually, this may be the bit that a lot of long-time Max users find most exciting, even despite the banner features.

Patching is now significantly enhanced. You can patch and unpatch objects just by dragging them in and out of patch cords, instead of doing this in multiple steps. Group dragging and whatnot finally works the way it should, without accidentally selecting other objects. And you get real “probing” of data flowing through patch cords by hovering over the cords.

There’s also finally an “Operate While Unlocked” option so you can use controls without constantly locking and unlocking patches.

There’s also a refreshed console, color themes, and a search sidebar for quickly bringing up help.

Plus there’s external editor support (coll, JavaScript, etc.). You can use “waypoints” to print stuff to the console.

And of course a ton of new improvements for Max objects and Jitter.

What about Max for Live?

Okay, Ableton and Cycling ’74 did talk about “lockstep” releases of Max and Max for Live. But… what’s happening is not what lockstep usually means. Maybe it’s better to say that the releases of the two will be better coordinated.

Max 8 today is ahead of the Max for Live that ships with Ableton Live. But we know Max for Live incorporated elements of Max 8, even before its release.

For their part, Cycling ’74 today say that “in the coming months, Max 8 will become the basis of Max for Live.”

Based on past conversations, that means that as much functionality as possibly can be practically delivered in Max for Live will be there. And with all these Max 8 improvements, that’s good news. I’ll try to get more clarity on this as information becomes available.

Ther’s a 30-day free trial. Upgrades are US$149; full version is US$399, plus subscription and academic discount options.

Full details on the new release are neatly laid out on Cycling’s website today: