It’s a looper, it’s a Session View controller. It’s USB powered, and you play it with your feet. But unlike other options, Datalooper integrates directly with how you work in Ableton Live – and it doesn’t require Max for Live to operate. Here’s a first look – and an exclusive discount.

Ableton may have called their event “Loop,” but that doesn’t mean there’s an obvious way to control the software’s looping capability via hardware out of the box. And that’s essential – Ableton Push is great, but it doesn’t fit a lot of instrumental and vocal uses. It’s too complicated, and involves too much hand-eye coordination – stuff you want to focus elsewhere. I’m not sure what Ableton would have called their own foot hardware – Ableton Tap? Ableton Toes? But instead, users have been stepping up … sorry, unintentional pun … and giving Live the kind of immediacy you’d expect of a looper pedal.

Demand seems higher than ever – there were two projects floating around Ableton Loop in LA last week. I covered State of the Loop already:

Ableton Live Looping gets its own custom controller

That project focused mainly on the Looper instrument and the use of scenes, all via Max for Live. It also seems well suited to running a lot of loopers at once.

Datalooper – the work of musician/creator Vince Cimo – is a similar project, but finds its own niche. First off, Max for Live isn’t required, meaning any edition of Live will work. (It uses a standard Live Control Script to communicate with Live.) 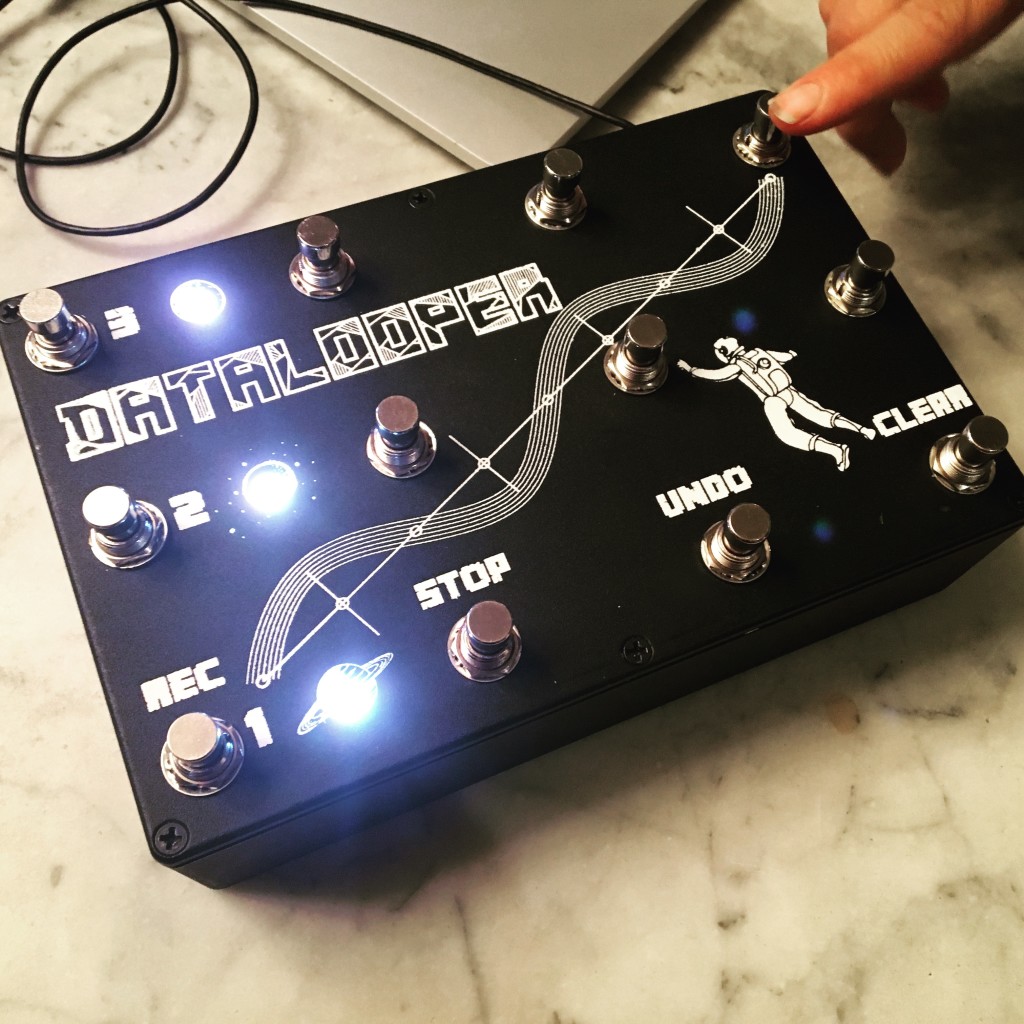 We got hands-on with Datalooper at Ableton Loop this year.

Datalooper will use the Looper device if you want. In that mode, it’s basically a controller for the Looper instrument – and supports up to three at once by default (which will be enough for most people anyway).

But there’s not much difference between the Looper device and other plug-ins or dedicated looping tools. “Natively” looping in Live still logically involves Session View. Before Ableton had a Looper, the company would advise customers to just record into clips in the Session View. That’s all fine and well, except that users of hardware pedals were accustomed to being able to set a tempo with the length of their initial recording, so the loop kept time with them instead of having to adjust to an arbitrary metronome. 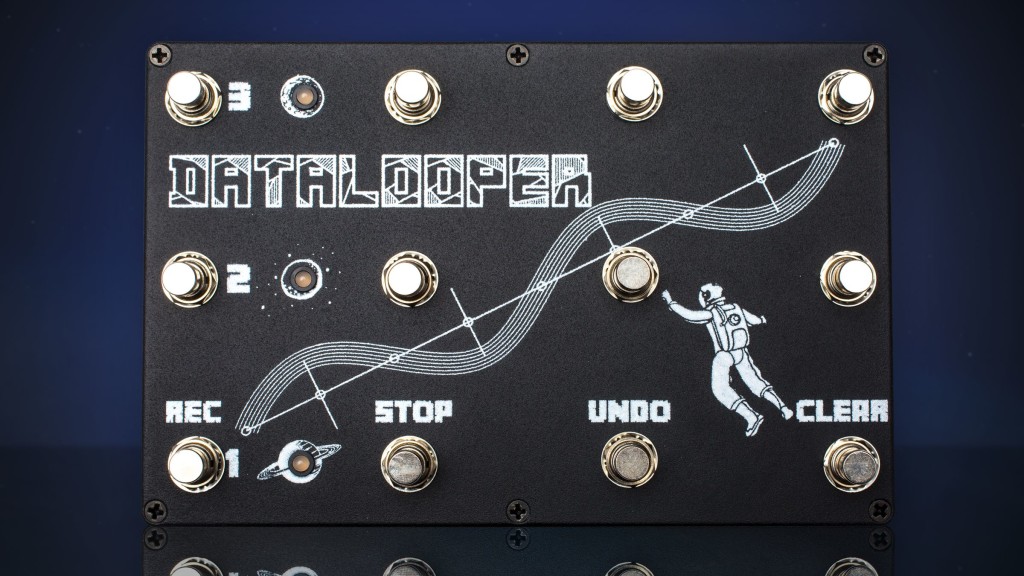 Datalooper does both. You can use Session View, taking advantage of all those clips and arrangement tools and track routing and effects chains. But you can also use the looper to set the tempo. As the developers describe it:

If you long press on the clear button, the metronome will turn off, and the tempo will re-calculate based on the next loop you record, so you can fluidly move between pieces without having to listen to a click track. Throughout this process, the transport never stops, meaning you can linearly record your whole set and capture every loop and overdub in pristine quality.

Datalooper is also a handy foot-powered control system for working with clips in general. So even if you weren’t necessarily in the market for a looper or looper pedal, you might want Datalooper in your studio just to facilitate working quickly with clips.

(And of course, this also makes it an ideal companion to Ableton Push … or Maschine with a Live template, or an APC, or a Launchpad, or whatever.)

Session Control mode lets you hop in and record quickly to wherever you wish. I imagine this will be great for improvisation not only solo but when you invite a friend to play with you.

For users that are more familiar with the clip system, the Datalooper also features a ‘session control’ mode, built to allow users to quickly record clips. In this mode, the Datalooper script will link up with a track, then ‘auto-scan’ and latch on to the first unused clip slot. You can then use the first the buttons in a row to control the recording, deletion and playback of the clip. Best of all, when you want to record another clip, you can simply press record again and the script will find you another unused clip slot. This is a game-changer if you’re trying to quickly record ideas and want your hands free.

You get all of this in a nice, metal box – die-cast aluminum, weighing 3 lbs (1.4 kg), micro USB bus-powered standard MIDI device. The onboard LEDs light to show you status and feedback from the metronome.

By default, it uses three loopers, but all the behaviors are customizable. In fact, when you want to dive into customization, there’s drag-and-drop customization of commands. 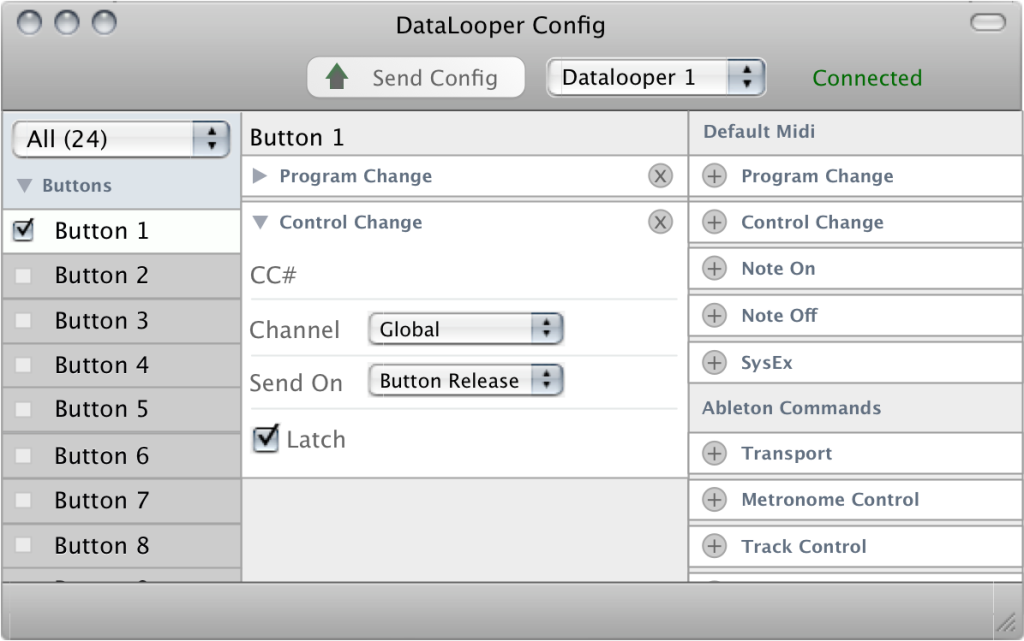 A graphical controller editor lets you customize how the Datalooper works. This could be the future of all custom control.

US$199 is the target price, or $179 early bird (while supplies last). It’s now on Indiegogo; creator Vince Cimo needs enough supporters to be able to pull the trigger on a $10k manufacturing run or it wont’ happen.

Vince has offered CDM readers a special discount. Head here for another $20 off the already discounted price:

(No promotional fee paid for that – he just asked if we wanted a discount, and I said sure!)

Having gotten hands on with this thing and seen how the integration and configuration works … I want one. I didn’t even know I wanted a pedal. I think it could well make Live use far more improvisatory. And the fact that we have two projects approaching this from different angles I think is great. I hope both find enough support to get manufactured – so if you want to see them, do spread the word to other musicians who might want them.