ArKaos is a long-standing name in VJ apps, as one of the tools that defined the genre in the 90s. GrandVJ has been gradually evolving with a more modern foundation, marked by a simple, musical, performance-oriented interface and high-performance playback. Its engine is the same as powers high-end media servers – but at a fraction of the price.

Version 1.5 offers a new crop of features, but the biggest may be the ability to pipe in audio and MIDI from a music app via a plug-in. Using a VST for Windows and Mac, you can insert the new ArKaos Connect to send interactive sound and control signal from any music app into the GrandVJ app, for live synchronized visuals. You’ll see in the demo a two-computer rig – the sort that a visual and musical performer might set up for onstage collaboration – connected via Ethernet, working in this case with Cubase. (ArKaos says they’ve directly tested Ableton Live, Cubase, Cakewalk Sonar X1, Reaper, and FL Studio; any VST host should theoretically work. I’m guessing Live will be the most common of those, given its wild popularity in live performance.)

This isn’t the only way to get audio and MIDI between machines, but it does seem an added convenience. I’m only unsure of the “custom ArKaos protocol” and why that was necessary; I’ll have to investigate.

Whether or not that piques your interest, there’s plenty new in 1.5. Among other additions: 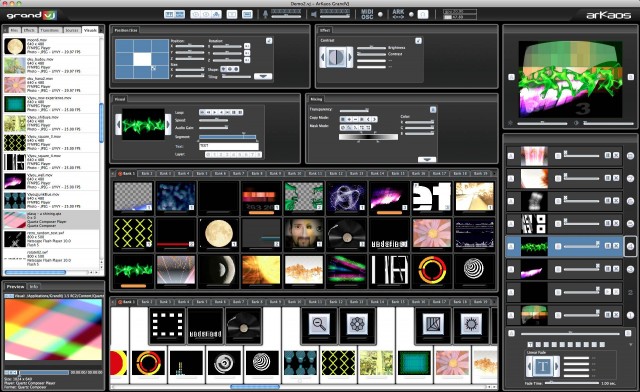 GrandVJ’s mixing architecture I think won’t appeal to everyone – it’s not as wide-open as VDMX or Resolume, for instance, and its mixer setup does take some adjustment. On the other hand, it has consistently been musical in its approach, particular in its trademark on-screen MIDI keyboard and “synth” triggering. It’s possibly the easiest app out there to use with MIDI, and on the Mac, Quartz Composer setup – and bundled compositions – mean custom and generative visuals are a real possibility. Adding new VST integration could significantly broaden its appeal.

We badly need to do a CDM VJ app shootout, if anyone is up for helping or wants to make suggestions. I’m open to ideas.

GrandVJ is priced from EUR279.